Welcome to this quick tip where I’ll be showing you how to copy layer styles in Photoshop. Unlike my Photoshop tutorials, this is going to be a short one.

Before we begin, let’s understand what is layer style. I know that some of my readers are very new to Photoshop.

What is Layer Style in Photoshop

A layer style is one or more effects applied to a layer or layer group. You can apply one of the preset styles provided with Photoshop or create a custom style using the Layer Style dialog box. The layer effects icon

Photoshop is referring to this button with I have made a Photoshop document for this tutorial. I colored my background with off-orange color, added two identical texts. One of them has a layer style and another has not.

I am going to copy the one layer style which would be Bevel and Emboss from the Top Text.

To do this, hold down Opt/Alt and drag the Bevel and Emboss layer style to the Bottom Text.

Release the Opt/Alt after that. 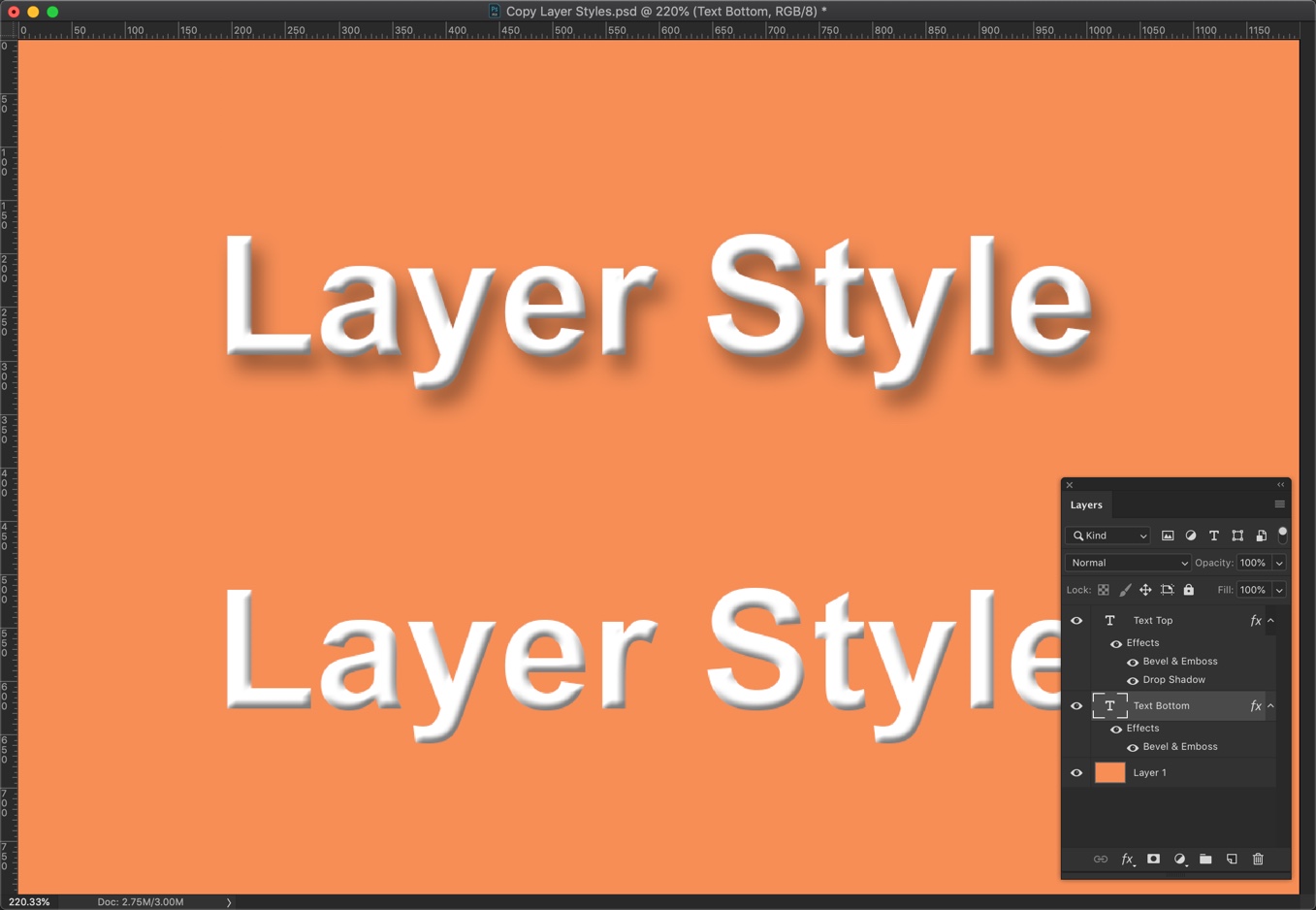 Here’s a GIF for you. Make sure that you have held down the Alt/Opt key.

There’s no shortcut for this. You need to copy each layer style one by one using the way which I have you shown you above.

This is the easiest one. Right click on the layer of which layer styles you want to copy. Click on “Copy Layer Styles”. Now, right click on the layer on which you want to paste this. We have been copying and pasting the layer styles in the same photo. What if you need to copy one layer style from one photo and add it to another.

You can also do this. But you can only do this by copying all layer styles and pasting them on another image. You cannot drag and drop a layer style.

Right click on the layer of which layer styles you want to copy. Click on “Copy Layer Styles”.

Now, right click on the layer on which you want to paste this.

This is all, guys.

Make sure that you make the most out of the offer below.

Layer panel is something that you will use often in Photoshop. It is the thing that differentiates Photoshop from other cheap photo editing apps. You can do below things with the help of layer panel

What can you expect from this tutorial?

I will be showing you how does a layer panel look, what it is, how does it work, all the buttons that you get in a layer panel, its features, and most used shortcuts for layer panel to make photos for your business or personal use to create a better look.

1. What is Layers in Photoshop?

In a nutshell, Layers are simply a stack of images placed over one another

2. What is a Layer Panel in Photoshop?

Layer panel is the window where you’ll see all the layers. The highlighted part written with “Background” is a layer.

This is how a layer panel looks in Photoshop. I’ll explain everything in this panel shortly. 3. Where is layer panel located in Photoshop?

If you’re using Photoshop for the first time, it should be at the bottom right. 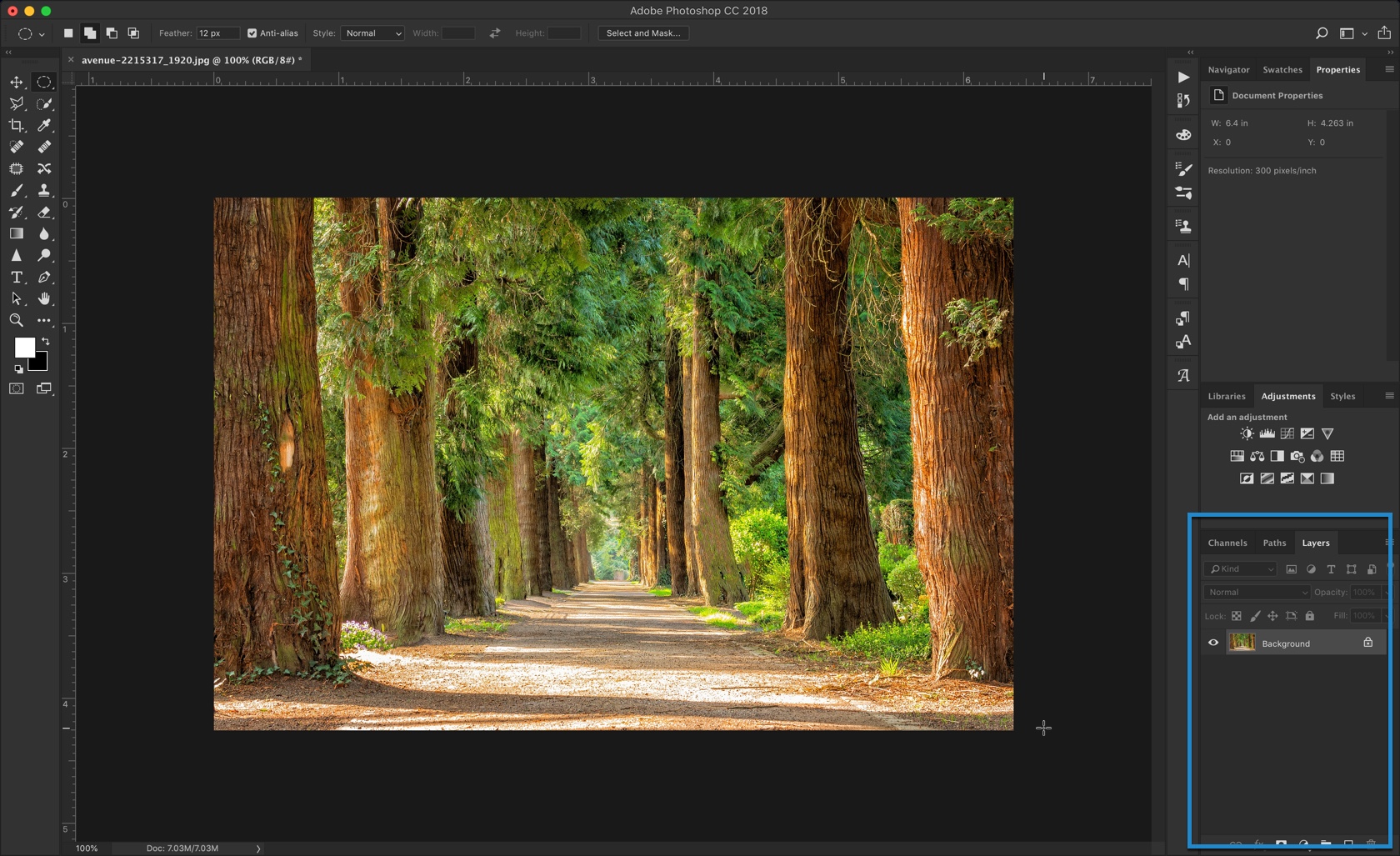 If by any reason it does not, you can open it by going to Windows > Layer. You can also press F7 as a keyboard shortcut. 4. Anatomy of a layer panel in Photoshop.

Save below image. It is the most important image if you want to understand the layer panel. Here I have explained all buttons in a layer panel. 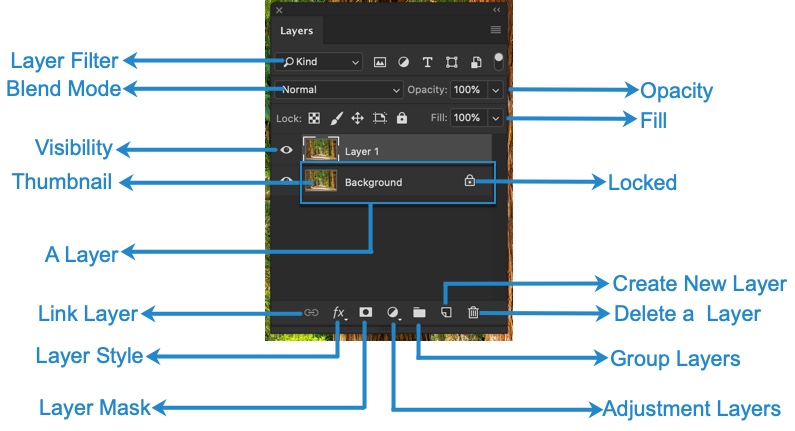 I am going to explain each one to you one by one. Let’s start with Layer Filter and go anti-clockwise.

Layer Filter – You will use it once you become an advanced user. There are so many types of layers like a normal layer, adjustment layers, smart object, etc. You can filter the similar types of layers via this.

Blend Mode – This is used to create special effects. Blend mode is basically the behavior of pixels that is based on the behavior of the pixels presents in the below layer. This is a bit complex topic. If you want to learn more, I have already written a complete guide on Blend Modes in Photoshop.

Visibility – You can show or hide a layer by clicking on this. It looks like an eye icon.

Thumbnail – This is the tiny view of the layer. It will preview how your layer looks

A layer – The entire thing that is surrounded by the blue rectangle is a layer.

Link Layer – It will help you to connect/link two layers. Two linked layers move together when you use the Move tool to move a layer

Layer Style – This is where you get options ta add fancy styles like a shadow, outer glow, etc.

Layer Mask – It adds layer mask. The layer mask controls the transparency of a layer.

Group Layers – This comes into handy when you have so many layers. You can group multiple layers together so that your layer panel doesn’t look cluttered.

Create a New Layer – You can create a new layer here. Alternatively, you can use keyboard shortcut Cmd + Shift + N/Ctrl + Shift + N.

Locked – This allow a layer to be protected from moving.

Fill – It adjusts the amount of opacity of the pixels only. Any layer styles are unaffected and remain 100% opaque.

Opacity – It adjusts the amount of opacity. Layer styles are also affected by this.

5. Major types of layers in a layer panel

I will explain each layer one by one. Let’s start from the top.

Text Layer – This layers can contain only texts. You can change the font, size, styling of the text present in this layer.

Adjustment Layer – This is a special type of layer where you can edit the photo like changing its brightness, contrast, saturation, color, etc. non-destructively (means you can undo or change it at any point of time). Go to Layer > New Adjustment Layer to have a look at the adjustment layers.

Smart Object – A special type of layer that is actually a container that can hold; multiple (or 1) layers, vectors for illustrator, raw files, video, 3D or many other types of objects.

Background Layer – When you open an image, the image will be present in the background layer. There’s a lock sign at the right of the layer. This means that the layer is locked and you cannot move the image in this layer. Click on the lock to unlock it.

6. Shortcuts in layer panel in Photoshop

To select multiple layer, hold down Cmd/Ctrl and then click on the layers.

To turn the visibility on/off of a layer, click on the eye icon present at the left side of the layer.

To copy or duplicate a layer, press Cmd/Ctrl + J.

To move a selection to a new layer, press Cmd/Ctrl + Shift + J.

To move all selected layers to a group, select the layers and then press Cmd/Ctrl + G.

To add an inverted mask (everything will be hidden), hold Option/Alt while adding a mask.

You can drag elements from the layers panel into other documents

This is all for today. Have a look at The Ultimate Guide series for more exciting tutorials.

Make sure that the make the most out of the offer below.